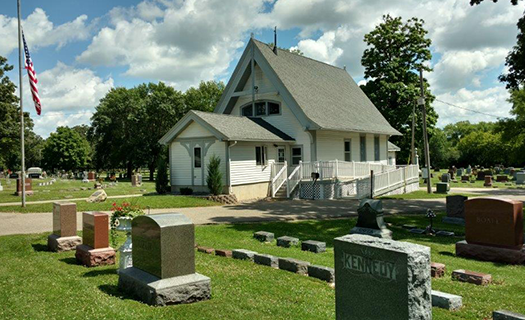 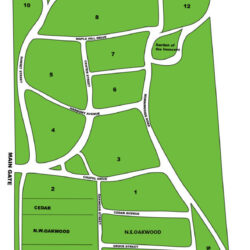 Oakwood Cemetery was created in 1862 with the first idea coming from the women of Austin. They believed that Oakwood should be a quiet, dignified place of rest for their loved ones. Oakwood Cemetery is a non-denominational, non-sectarian and open to all.

On March 7, 1904 the trustees were authorized to erect a chapel and burial vault. The chapel had a complete cost of $4,000.00. The building is 28 x 42 feet with porch six feet wide over the main doorway on the west and connected with this is a spacious port cochere, 13 feet wide, furnishing ample protection from rain while getting in or out of carriages. As you enter the main doorway, on the right of the hall in the southwest corner is the superintendent’s office. On the other end of the hall, stairs go up to the choir gallery above which contains an organ and seats for choir and others.

On the main floor of the auditorium are beautiful oak pews capable of seating for 125 people with plenty of room for chairs to accommodate including the gallery about 250 people. At the east end of the auditorium is the rostrum with pulpit and chairs. In front of the pulpit is a lowering device for lowering caskets to the vault below. In the basement is a fire proof vault with a capacity for 75 caskets. This will be used for the storage purposes during the winter time. The vault is of iron frame laid in cement and has iron doors across its entrance on the east. The GAR (Grand Army of the Republic) owned lots in the cemetery. After obtaining new lots or burial purposes, they used old lots for a soldier’s monument which was dedicated in 1907.

Oakwood Cemetery has over 14,000 burials. The names on the stones give one a sense of history in the Austin area. They include Hormel, Baudler, Basford, French, Schleuder, Galloway, Woodson, Banfield and many more.

Oakwood Cemetery is also the site of the ‘Hunter Clark’ cabin: the areas first dwelling.

Books and paper used as references